Parish priests in one of the central Italian regions struck by a devastating 6.5 magnitude earthquake on Sunday have been advised to hold Mass outdoors in the coming days

Around 20 people were injured but no-one was killed in the earthquake which was the worst recorded in Italy for 36 years – and was felt 100 miles away in Rome.

In the capital, cracks appeared in at the 4th century church commonly known as « St Paul’s Outside the Walls ». St Peter’s Basilica and other historic buildings at the Vatican were checked and given the all clear for pilgrims and tourists.

The epicenter of the earthquake was close to Norcia, the same area hit by two earthquakes last week and a previous earthquake in August that killed nearly 300 people.

Norcia is famous for its cured meats and its 14th century St. Benedict’s Cathedral, which was among several churches that crumbled in the latest quake.

Cardinal Gualtiero Bassetti told priests in the Umbrian region to avoid celebrating church services indoors after the earthquake struck Sunday morning, as well as for All Saints’ Day, a religious holiday when Catholics remember the dead on November 1.

While many gathered to pray outside the fallen cathedral, one nun had to be carried by firefighters and others were evacuated from the nearby Santa Maria Della Pace Monastery.

“Tell everyone we are all in good health,” one elderly nun told Sky Italy TV news as she was being led to safety.   The deputy mayor of Norcia, Pierluigi Altavilla, said his house remained standing, but everything inside had been toppled.

« It seemed like a bomb exploded inside the house, » he told Sky TG24.   Prime Minister Renzi called a media conference to express his compassion for those affected and pledged to rebuild “churches, homes and businesses”.

Cabinet is due to hold a special meeting on Monday to discuss emergency measures.

Many people appeared to have been spared from the impact of the latest quake because they had been sleeping in cars or moved to shelters or hotels in other areas after a pair of strong jolts on Wednesday.

However, up to 100,000 people may be left homeless or require state aid after the quake, regional authorities said.   “The whole town has collapsed here, there’s nothing left,” said Marco Rinaldi, the Mayor of Ussita, which was also hit by last week’s earthquakes. “It is a disaster. “I was sleeping in my car and I saw hell.”   The latest 6.5 magnitude earthquake struck at 7.40am local time sending panicked residents already shaken by hundreds of aftershocks into the streets and piazzas wrapped in blankets.   Aftershocks continued through the morning including a 4.6 magnitude earthquake at Norcia at 1.07 pm Sunday and another 4.5 magnitude aftershock in the same area over an hour later. 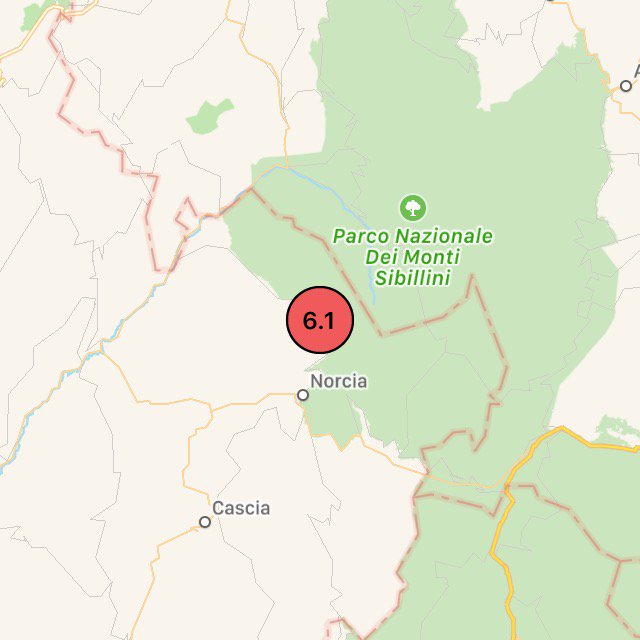 But Sunday’s early morning tremble was felt across Italy as far north as Bolzano in the Alto Adige region to the region of Puglia in the southern heel of the country but it remarkably caused no casualties.

Residents in parts of Rome were also roused from their beds and ran out into the streets as the capital was also rocked by the quake. The metro was halted for hours and the Colosseum was being checked for damage.   The head of Italy’s civil protection agency, Fabrizio Curcio, said there were no deaths but said around 20 people had suffered minor injuries as many buildings that had resisted the previous temblors collapsed.

He said the earthquake was significant and the viability of the towns in the area was “seriously compromised”.

One 55-year-old woman was reported to have been seriously injured when she threw herself out the window and was taken to Perugia hospital and three people were pulled from the wreckage in the town of Tolentino.

Mr Curcio said 1,300 people had been evacuated to the coast, and thousands of others were expected to follow.

Civil protection officials and firefighters spent hours combing the ruins to check if residents were trapped beneath the rubble while helicopters ferried the wounded as many roads were blocked from rockslides.

Towns and villages already battered by the 6.2 quake last August have suffered further significant damage, according to local officials, as it emerged that Sunday’s quake was the strongest to hit the region since a 6.9 magnitude quake in southern Italy in 1980 that killed 2,735 people.

« This morning’s quake has hit the few things that were left standing. We will have to start from scratch, » Michele Franchi, the deputy mayor of Arquata del Tronto, told Rai television.

The cost of Sunday’s earthquake is starting to sink in… 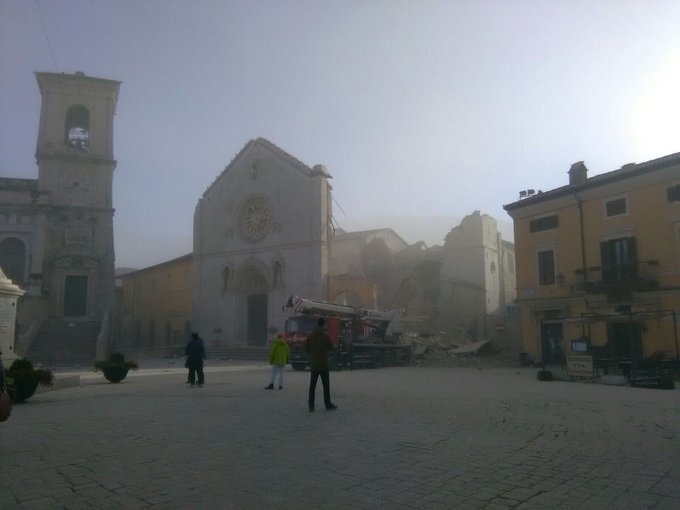 It hurts to see this picture. Church of #SanBenedetto in #Norciacollapsed after the #earthquake of this morning. #umbria#octber30th2016

It hurts to see this picture. Church of #SanBenedetto in #Norcia collapsed after the #earthquake of this morning. #umbria #octber30th2016 pic.twitter.com/AmszLnqtQP

Prime Minister Renzi: ‘We will rebuild’

Matteo Renzi has pledged to « rebuild everything » after the quake and has expresses compassion for the people affected. His cabinet will meet tomorrow to discuss financial measures.

He says the money will be found to rebuild churches, houses and businesses.

Update from Josephine McKenna in Italy

Head of Civil Protection dept Fabrizio Curcio has confirmed at a 12:20pm (local time) press conference that there are no deaths however around 20 have been injured.  Viability of the towns « seriously compromised ».

Pope Francis expressed his closeness to quake victims at this morning’s Angelus at St Peter’s Square which garnered applause from crowds at Vatican.

« I am praying for the injured and the families that have suffered major damage and also the personnel engaged in rescues and assistance,  » he said.

Italian president Sergio Mattarella has expressed « solidarity and support » for the victims.

A Catholic Church leader in one of the two regions where another earthquake has caused buildings to collapse is advising parish priests to avoid holding Mass inside churches.

Cardinal Gualtiero Bassetti told priests in the Umbria region to hold Mass outdoors following the Sunday morning earthquake as well as on All Saint’s Day on Tuesday, a holiday on which Catholic’s remember the dead.

The news agency ANSA said Bassetti, head of the Catholic Bishops Conference of Umbria, made the decision after consulting with the head of the region.

The earthquake with a preliminary magnitude of 6.6 has damaged historic churches in the town of Norcia, including the 14th century St. Benedict cathedral in one of the city’s main piazza.

The earthquake in central Italy has damaged the 4th century church in Rome commonly known as ‘St Paul’s Outside the Walls’.

ANSA news agency reported that cornices fell and cracks appeared in the walls after the quake struck central Italy and shook many buildings in the capital.

The report said firefighters and police were called to the basilica, one of the most popular for Christian pilgrims after the quake.

The Basilica is one of Rome’s four ancient, Papal, major basilicas, along with the Basilicas of St. John in the Lateran, St. Peter’s, and St. Mary Major.

The Basilica was founded by the Roman Emperor Constantine I over the burial place of St. Paul, where it was said that, after the Apostle’s execution, his followers erected a memorial, called a cella memoriae.

Rome officials also checking the Colosseum and Roman Forum for signs of cracks or quake damage.

This map shows the epicentre of the earthquake 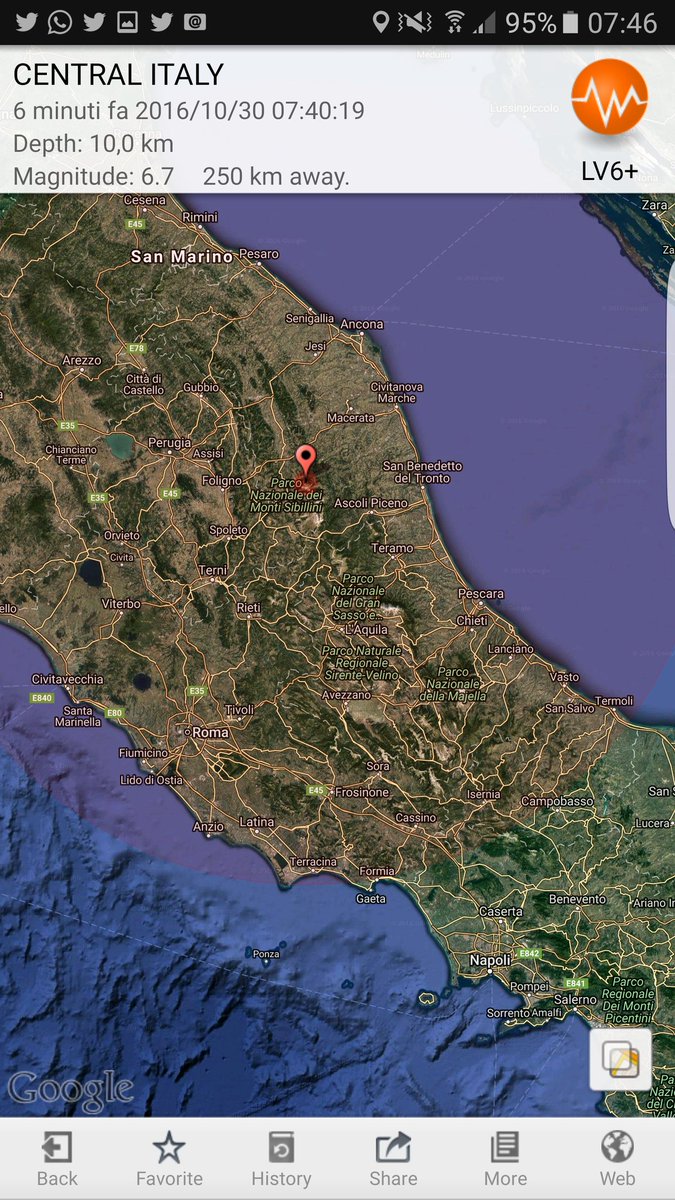 The mayors are asking for help.. People are exhausted. They need solidarity from all Italians. Situation very serious.

The head of Italy’s civil protection agency says there are no immediate reports of deaths.

Fabrizio Curcio said some people suffered injuries as numerous buildings that had resisted previous temblors in August and last week collapsed. He did not provide details on the nature or extent of the injuries.

Curcio says the agency is using helicopters to tend to the injured and to assess damage.

He says 1,300 people displaced on Wednesday by a pair of powerful aftershocks to an August quake that killed nearly 300 had been evacuated to the coast in recent days and that the operation would continue.

Residents in parts of the capital ran out into the streets as the walls and floors of homes and buildings shook for several seconds, writes Josephine McKenna. The fire service received dozens of calls in the capital and the metro was stopped temporarily while officials checked the strength of the quake.

The mayor of quake-hit Ussita said a huge cloud of smoke erupted from the crumbled buildings.

« It’s a disaster, a disaster! » Mayor Marco Rinaldi told the ANSA news agency. « I was sleeping in the car and I saw hell. »

The quake was felt throughout the Italian peninsula, with reports as far north as Bolzano and as far south as Bari. Residents rushed into the streets in Rome, where ancient palazzi shook, swayed and lurched for a prolonged spell.

The head of the civil protection authority in the March region, Cesare Spuri, said there have been reports of buildings collapsing in many cities.

« We are trying to understand if people are under the rubble, » Spuri said.

In Norcia, nuns knelt in prayer and a firefighter appealed to a priest to help maintain calm among dozens of residents gathered there, including some in wheel chairs.

Basilica of St Benedict in Norcia before and after earthquake Sunday… #terremoto #ItalyEarthquake pic.twitter.com/RSPQCz8UwY

The church, which had withstood the August earthquake in August and last week’s aftershocks, still was standing, but television pictures showed piles of stone had accumulated at the bottom of one wall. One stone was thrown meters into the center of the piazza, illustrating the quake’s force.

« We have to keep people calm. Prayer can help. I don’t want people to go searching for family members, » the firefighter appealed as cameras from SKY TG24 filmed.

The German Research Centre for Geosciences put the magnitude at 6.5 and said it had a depth of 10 kilometers, a relatively shallow quake near the surface but in the norm for the quake-prone Apennine Mountain region. 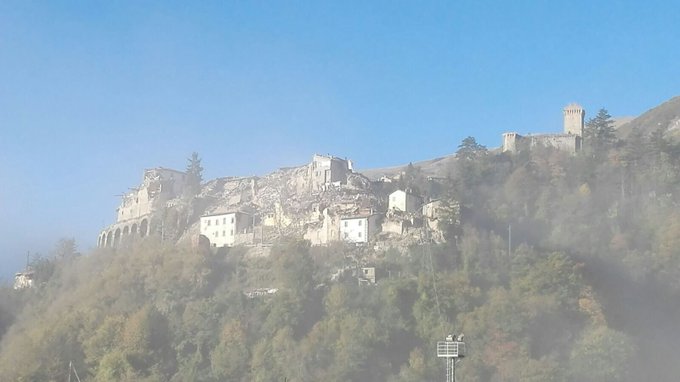 In Arquata del Tronto a small comune (municipality) in the Italian region of La Marche which had been devastated by the Aug. 24 earthquake that killed nearly 300 people, Mayor Aleandro Petrucci said, « There are no towns left. »

« Everything came down, » he said.

Dramatic footage of nuns being rescued

Nuns rescued from church after 6.6 magnitude quake hits ItalyPlay!00:37
8:11am

The monks are safe

On the Monks  of Norcia website Father Benedict the Subprior had this to say:

Around 7:40 AM, a powerful earthquake struck close to Norcia. The monks are all safe, but our hearts go immediately to those affected, and the priests of the monastery are searching for any who may need the Last Rites.

The Basilica of St. Benedict, the historic church built atop the birthplace of St. Benedict, was flattened by this most recent quake. May this image serve to illustrate the power of this earthquake, and the urgency we monks feel to seek out those who need the Sacraments on this difficult day for Italy.

Relying, as ever, on your prayers and support

Note: If you want to help the rebuilding process, you can give to the monks by clicking here.

More images of the damage are coming in

Italy lies on a series of major seismic fault lines…

…as this map shows

A quake which hit the region on October 27 destroyed many buildings including the church of San Salvatore in Campi di Norcia. At least 200 aftershocks followed the first of two big earthquakes to hit central Italy the previous evening, the National Institute of Geophysics (INGV).

The Basilica of St. Benedict has been destroyed 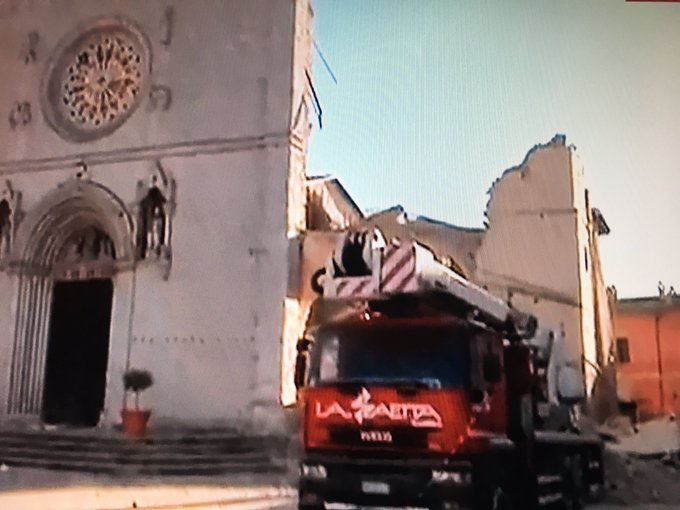 In #Norcia, the basilica of St. Benedict, is gone.#earthquake#terremoto

In #Norcia, the basilica of St. Benedict, is gone.#earthquake #terremoto pic.twitter.com/mailJR3Gdd

Monks at the monastery of San Benedetto, an international Benedictine community in Norcia, posted an image of the Basilica destroyed by the earthquake.

Reports coming in of extensive damage in the region

The Monks of Norcia @monksofnorcia

The Basilica of St. Benedict is destroyed, flattened by most recent earthquake. #Terremoto

The Basilica of St. Benedict is destroyed, flattened by most recent earthquake. #Terremoto pic.twitter.com/GQDl64LhFn