Matteo Renzi, the Italian Prime Minister, has said at least 120 people have been killed by the earthquake that struck Italy in the early hours of Wednesday morning.

« This is not a final toll, » Mr Renzi said after visiting  rescue workers at the centre of the earthquake zone in central Italy. Earlier the death toll from the quake had been put at 73.

Mr Renzi thanked rescuers for their efforts in recovering dozens of people from rubble caused by a massive earthquake in the region.

« At moments of trouble Italy knows how to cope. No family, no city, no hamlet will be left alone, » he said.

The 6.2 magnitude quake, which sent residents fleeing their homes and running into the streets, is Italy’s deadliest since a 2009 quake in the same area. A family of four were also trapped under the rubble and showing no signs of life.

The shallow quake, estimated to have struck after 3:30am at a depth of six miles, was felt across a broad section of central Italy, including the capital Rome where people in homes in the historic centre felt a long swaying followed by aftershocks.

The mayor of Amatrice near Rieti, Sergio Perozzi, told state-run RAI Radio 1 that there were downed buildings in the town centre and that the lights had gone out. He said he was unable to get in touch with emergency responders or reach the hospital.

« What can I tell you? It’s a tragedy, » he said. « Half the town is gone. There are people under the rubble… There’s been a landslide and a bridge might collapse. »

A resident of the Rieti region, which is between Rome and the epicentre of the quake, told the Rainews24 channel that she and most of her neighbours had come out onto the street after feeling « very strong shaking. »

In 2009 a 6.3-magnitude earthquake in the Aquila region, which was also felt in the Italian capital, left more than 300 dead.

Italy is often shaken by earthquakes. Another quake hit the northern Emilia Romagna region in May 2012, when two violent shocks 10 days apart left 23 people dead and 14,000 others homeless. 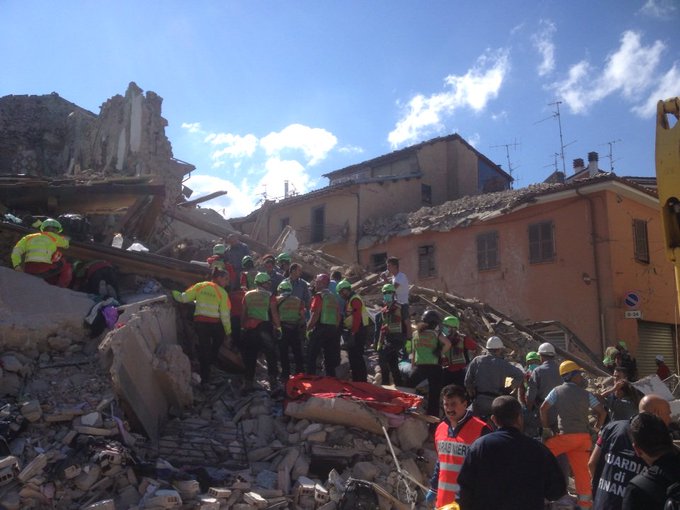 ‘Silenzio!’ rescue workers shout when they think they can hear signs of life under the rubble. #italyquake

The Vatican said six of its firefighters travelled to the demolished town at the heart of the earthquake zone, to help rescuers in the ongoing search for survivors.

The city-state’s fire brigade has a total of 37 firefighters.

The Vatican contingent joins a stream of rescue workers and equipment, including heavy earth movers and sniffer dogs, that continued to arrive in the region on Wednesday evening.

‘I woke up and saw that everything was destroyed’

What was once the thriving main street of Amatrice now looks like it has been hit by a sustained artillery attack, writes our Rome correspondent Nick Squires.

One of the buildings worst hit was the convent and church of the Most Holy Crucifix.

The three-storey building folded in on itself, its historic bell tower crashing to the ground.

“I was sleeping but suddenly heard this strange noise. I woke up and saw that everything was destroyed,” said Marianna, 35, a nun who was helping to look after the elderly people staying in the convent on a summer retreat.

She sustained a deep gash to her forehead and her hair was matted with blood and dust.

She was rescued by a young local man who hauled her out of the wreckage.

They then heard more cries for help – two other nuns were trapped in the debris. This time it was a pair of local forest rangers who went to the rescue.

“They performed a very heroic act, they risked their lives. I’m sure God will reward them,” Marianna said. A panel on the outside of the convent that recounts its history notes that it was badly damaged by an earthquake before – back in 1639.

« The pictures we seeing are awful. We will be ready to do everything we can to help Italy if needed, and our thoughts are with the people of the region today, » Mrs Merkel said a news conference in Estonia.

Vladimir Putin earlier offered to send « any necessary » assistance from Russia to help cope with the aftermath of the quake.

‘God took my children all at once’

Holly Bancroft has some more details on the family trapped under rubble in Accumoli:

Rescuers tried to save them for hours. In the early hours of the morning the photographer Emiliano Grillotti described the work of at least 15 people who were digging with their bare hands to get them out:  » You could hear the screams of the mother and one of the children. »

The children were aged 8 months and 9 years. They were killed when their house in Accumoli collapsed.

As the rescue workers carried away one of the bodies the children’s grandmother blamed God saying, « He took them all at once ».

This is the moment a rescue worker comforts a woman trapped under rubble in Capodacqua, Italy. She was later rescued and taken to hospital.

British tourist describes being caught up in Italian earthquake

Eve Read from London, who’s on holiday with her family close to the epicentre of the Italian earthquake, describes how they were forced to huddle for shelter by the door of their holiday home.

British tourist describes being caught up in Italian earthquakePlay!01:32

Before and after images show extent of the devastation

From the Telegraph’s Meabh Ritchie:

The earth is shaken and Quaken as also Hurricanes are forming in the Atlantic Oceanhttp://www.paulbegleyprophecy.com also Help Us Spread the Word https://www.paypal.com/cgi-bin/webscr… also http://abcnews.go.com/US/wireStory/tr… also https://weather.com/storms/hurricane/… also https://crusaderjournal.com/2016/08/2…

Satellite imagery this weekend showed an interesting sight near Japan as a trio of tropical systems spun near the country. One of those three systems, Mindulle, made landfall near Tokyo as a typhoon on Monday.

99L is the hot topic right now. What will it do and where is it headed? I do my best to break it all down comparing ECMWF and GFS output in today’s discussion

(The Weather Channel) – Satellite imagery this weekend showed an interesting sight near Japan as a trio of tropical systems spun near the country. One of those three systems, Mindulle, made landfall near Tokyo as a typhoon on Monday.

Winds gusted to 57 mph at Tokyo’s Haneda International airport as Mindulle moved through. To the southeast of Tokyo, wind gusts up to 78 mph were reported in Tateyama.  READ MORE

Apocalyptic weather is beginning to manifest in Japan and America as the hurricanes are raging http://www.paulbegleyprophecy.com also Help Us Spread The Wordhttps://www.paypal.com/cgi-bin/webscr… also https://weather.com/storms/hurricane/…also https://crusaderjournal.com