The questionable health condition of Hillary Clinton should be a major issue of the 2016 campaign.

The latest evidence comes in the form of Clinton being helped up a set of stairs by multiple individuals outside what appears to be a home.

The photos, published by Reuters and Getty, show the 68-year-old candidate with aides holding her arms as she ascends the stairs.
http://www.infowars.com/shock-photo-m…
** https://www.youtube.com/watch?v=OqbDB…
Help us spread the word about the liberty movement, we’re reaching millions help us reach millions more. Share the free live video feed link with your friends & family: http://www.infowars.com/show

The questionable health condition of Hillary Clinton should be a major issue of the 2016 campaign.

The latest evidence comes in the form of Clinton being helped up a set of stairs by multiple individuals outside what appears to be a home.

The photos, published by Reuters and Getty, show the 68-year-old candidate with aides holding her arms as she ascends the stairs.

The other shows as she makes it to the top, but not without assistance. 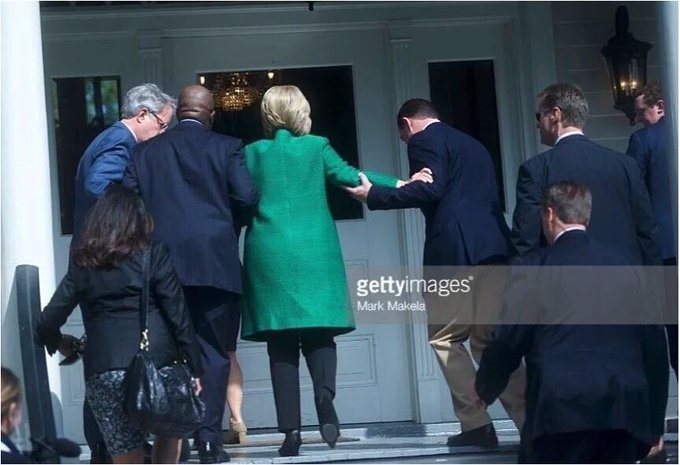 QUICK! GET THAT WOMAN A KAINE!

At what point is the mainstream media going to question Clinton’s health status?

« Involuntary movements » and difficulty walking is a form of dyskinesia

Citing his “15 year background in drug discovery and pharmaceuticals,” Shkreli asserts that the videos of Hillary’s strange facial movements and her difficulties with walking are “pretty unmistakable signs of Parkinson’s disease.”

Explaining that a stroke or a concussion wouldn’t explain the symptoms, Shkreli says that Hillary’s walking difficulties are a “cardinal symptom of Parkinson’s disease” and what is known as “freezing gait”. Shkreli adds that he helped develop a drug to treat the problem.

Hillary’s “on-off episodes” are a result of dopamine depletion, according to Shkreli, which is impacting Hillary’s movement.

“We’ve all seen the videos of her kind of making these perplexed facial movements,” says Shkreli, noting that Hillary’s over-reaction to balloons at the DNC was “unusual” because it betrayed an “inability to control her facial movements”.

However, Hillary’s seizure-like behavior in response to reporters asking questions in another clip was even more odd because she “made this involuntary movement for about ten seconds which was truly unusual,” states Shkreli, identifying the condition as a form of Parkinson’s-induced dyskinesia.

“This ia classic symptom….if you showed someone that symptom and said ‘name the disorder’ it’s not a seizure….that is simply involuntary movement, it’s PD-LID, no doubt about it in my mind,” adds Shkreli, concluding that when matched with Hillary’s “freezing gait,” it “explains everything.”

Shkreli emphasizes the fact the he is non-partisan and has given more money to Democrats than Republicans.

Despite his controversial background (Shkreli was once labeled the “most hated man in America” for raising the price of the drug Daraprim by 5556 per cent), his voice adds to the innumerable health experts and doctors who have been asking serious questions about Hillary’s ill health.

We highlighted Hillary’s bizarre behavior and her health problems in a video last week that has since gone viral and received well over a million views.

Suspicions over Hillary’s health have raged in recent days, with the Drudge Report running a series of headlines highlighting her numerous falls and difficulties walking.

Demand a mental and physical health test for both candidates.#HillarysHealth

In response, media outlets are beginning to characterize questions about Hillary’s health as little more than ‘right-wing conspiracy theories,’ although assertions by leftists that Donald Trump is mentally ill have not received similar treatment.

Other questions continue to swirl, including claims that one of Hillary’ “handlers,” who calmed her during the recent interruption of one of her speeches, carries around a an auto-injector syringe for the administration of the anti-seizure drug Diazepam.

According to Shkreli, the syringe “may be an Apokyn pen, used to treat Parkinson’s,” noting that it was the same color.

“Knowing what we know now, and looking at the above video, it looks like after Hillary seized up like a deer in headlights, the medic tries to calm her down, but was having problems because the Secret Service members on stage were freaking her out,” according to the Ralph Retort.

“The medic must have realized he wasn’t going to calm her down until Secret Service got off stage, so he went up to each of them individually, telling them to go away.”

Twitter users are now calling for Hillary to be given a mental and physical health screening under the hashtag #Hillary’sHealth.

Infowars will continue to report on the controversy as it develops….

Is she this FEEBLE or just DRUNK AGAIN!!?? 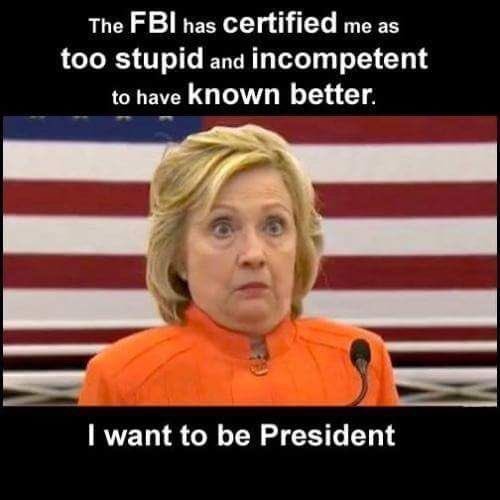 HEY!! If she strokes out you think her supporters will follow ?????

Looks like it’s going to be « Unrigged » by Julian Assange!!